The past few weeks have been something of a revelation for me. I started this blog purely for myself to get healthy after my pregnancy. But then due to hubby finding out about his arthritis and us following a fairly strict low starch diet to help alleviate his symptoms I came across ‘Keto diet’. It’s not a million miles away fro what we had started eat to keep low starch except Keto diet really pushes the amount of fat you should eat up.

We switched over from Paleo/Low Starch to Keto. The fats help keep us satisfied and makes everything super tasty! Its almost too good to be true.

Since starting Keto and keeping my carbs below 5% I’ve been losing weight consistently. I’m eating more veg than ever and generally feeling super energised… even when I’m sleep deprived from my 4 week old baby.

So what’s the crack?

Well, keto diet puts you in a state of Ketoses, essentially switching your metabolism from burning glucose as its primary source of fuel e.g. All the carbs and sugar you eat to burning stored fat by reducing your carb and sugar intake.

Its not ‘unatural’ in fact we’re designed to be in ketosis when food is scarce, but in a world of excess we no longer utilise this metabolic state. I’m not going to bore you with science you can read up and watch youtube videos on Ketosis by some of the leading scientists and make your own mind.

For me its fixing alot of issues, weight, hormones, mental clarity, energy levels.

Well it happened. Today I had a carb blowout. I woke up feeling fat and yucky, like I was suffering from PMT. I skipped breakfast so I was hungry. I ate my sons leftover english muffin. If that wasn’t enough I ate a cookie then later ate leftover marmalade on toast!

I expected a day like this, but not so soon. All I can do is move on, eat right and carry on. Maybe I should try and eat something at breakfast rather than let my body get soo hungry that I start craving starchy/sugary foods.

Incidentally I feel worse now and have come out with mouth ulcers!

This morning, the day after, I woke up with incredible bad stomach cramps and had bad guts. I’ve never fully eliminated starch and followed such a low carb diet. Is this a side effect? Well after some googling it appears other have experienced this too. It has put me off eating starch again for a while! I’ll chalk this whole 24 hour blowout experience down to an experiment…one that I won’t be trying again soon.

Quite pleased with that figure, obviously that’s 8lbs 13oz baby plus a bit extra for fluid etc so I think a stone of that is actual fat loss.

I believe the no starch / paleo diet is helping me. I’m not doing any exercise at present. I’ve set a target of getting below my pre-pregnancy weight of 14st 1lbs, which is 3lbs away. If I could get below 14st that would be a massive achievement for me mentally because prior to have my baby I failed to get below 14st despite exercising hard.  My baby weight from my first child was pretty stubborn and I never really got my act together with food. I weighed 11st 6lbs when I fell pregnant with my first and gained 2st whilst pregnant and another stone whilst breastfeeding. Ultimately I would like to return to my original weight of 10st 4lbs.

I know my weight figure isn’t everything and that I should be going off measurements however with me having such a large amount of fat to shift, until I get below 12st Im not going to bother with measurements, it’s pretty obvious that I’m going to shrink in size!

I’m on a bit of a quest to figure out some kind of bread that’s starch free..and Paleo.

Starch free because it makes my husbands AS flair up when he eats starch.

To go with it I made some onion Bhajis by frying some onions, then mixing up with some ground almonds, cumin, turmeric, salt and water and frying in coconut oil. They came out pretty good.

Then I made my first Naan bread, which was a complete disaster! Very heavy and crumbled.

Tonight I gave it another go and we were pleasantly surprised by the results. I’ll have to do a proper recipe for it but we think it could form the base for all sorts of bread based foods – pizza, focaccia bread, naan. Its a flat bread kinda thing.

Basically it consists of coconut flour, eggs, coconut milk. I think adding some Psyllium Husk powder might add some chewiness to it but those 3 simple ingredient’s seem to work pretty well!

One thing the No Starch/Paleo diet lacks is a good breakfast go to meal that’s not egg, veg or bacon! Well I thought that anyway. I’ve always enjoyed porridge for my breakfast. In the past I’d happily tuck into a … END_OF_DOCUMENT_TOKEN_TO_BE_REPLACED

Based loosely on a flat bread recipe I found I thought I’d have a bit of a play around with a pizza base recipe. I added Almond Flour, Psyllium Husk Powder and (oops! Cheese!! omit for true Paleo!) 100g Coconut … END_OF_DOCUMENT_TOKEN_TO_BE_REPLACED

On Friday evening I started with early labour, by Sat 4:55am our lovely bundle of joy arrived! Its now Sunday tea time and well we are eating rubbish to get through these first early days. But hopefully we can start with our new low starch Paleo-ish diet soon!

Originally posted on Pure and Simple Recipes:
This is my go-to Pure +  Simple Hamburger Bun, Sandwich Bread, and Breakfast Toast Recipe. This past year I have been making a pretty big transition from a high raw food diet to…

Moussaka is one of my favourite dishes and brings back so many memories of our wedding in Greece. I really want to make a tasty Paleo dish that’s also low starch. Low starch? Mainly for my husbands benefit to help … END_OF_DOCUMENT_TOKEN_TO_BE_REPLACED 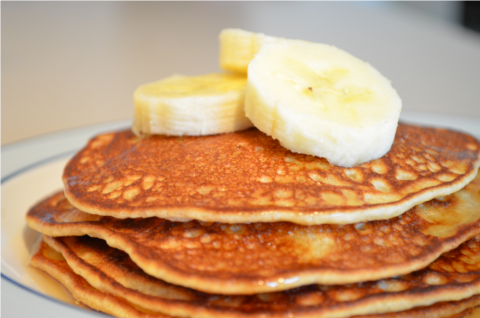 My son was hungry this morning so I decided to make some pancakes for him and give me a chance to experiment a little. In the past I’ve cooked banana pancakes, which is basically a mashed banana and egg to … END_OF_DOCUMENT_TOKEN_TO_BE_REPLACED